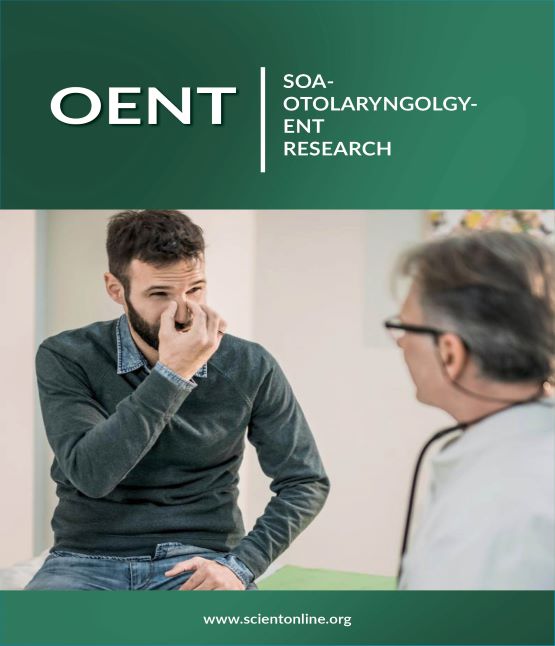 Copyright: 2018 Eugene Omakobia, et al. This is an open-access article distributed under the terms of the Creative Commons Attribution License, which permits unrestricted use, distribution, and reproduction in any medium, provided the original author and source are credited.

Abstract
Objectives: To audit local practice regarding hypocalcaemia monitoring and management after thyroid surgery. To compare practice with world literature and established British, American and Australian guidelines.
Methods: A retrospective audit over a 12 month period reviewing hypocalcaemia management for all 45 patients undergoing total or completion thyroidectomy within our ENT department.
Results: One third of all patients required calcium supplementation for hypocalcaemia. We are largely following British Thyroid Association and Society for Endocrinology UK guidelines. Statistical analysis shows that early (4 hour) post-operative PTH measurements play a key role in hypocalcaemia risk stratification.
Conclusions: Predicting hypocalcaemia risk may assist in facilitating early discharge in low risk patients and daycase surgery may be a possibility. We have used our findings to develop an agreed local post-operative hypocalcaemia management algorithm.
Fulltext
Introduction
Hypocalcaemia is a common complication of completion and total thyroidectomy. This is usually the result of transient hypoparathyroidism following removal of the parathyroid glands or disruption of their blood supply during surgery, but can be permanent [1]. In about 30% of cases this is temporary (lasting less than six months).
In <10% of cases this may be permanent (persisting for six months or longer), in which case lifelong vitamin D and calcium supplementation will be required [2].
In most UK ENT departments, corrected calcium and/or parathyroid hormone (PTH) levels are currently monitored after these operations due to this known risk. It is well recognised that accurately predicting the risk of post-operative hypocalcaemia in total or completion thyroidectomy patients may assist in facilitating early discharge in low risk patients [3]. For selected patients, this can reduce unnecessary calcium supplementation and will also assist in the early identification of higher risk patients likely to require calcium supplementation.
Background - Why is this audit needed?
In our ENT department, we found that some patients were having their calcium and/or PTH levels checked earlier or more frequently than others. We noted that there was no agreed guideline within our department stating when calcium and/or PTH levels should be checked, or when a low level should trigger the initiation of treatment.
There was also no guidance regarding PTH monitoring or on what specific calcium supplementation to give.
We considered that a lack of local guidelines may be resulting in unnecessary repeat blood tests, hypocalcaemia being over or under treated and unnecessarily prolonged hospital stays. This could also lead to confusion for junior colleagues/ward staff regarding the following:
- When to measure a patient's calcium level?
- When to measure a patient's PTH level?
- When and how to treat hypocalcaemia in a post-operative patient?
Upon reviewing the literature, we discovered that there were multiple differing opinions regarding the timing of post-operative blood tests. The British Thyroid Association (BTA) 2014 guidelines for the management of thyroid cancer recommend that serum calcium should be measured on the day after surgery (or earlier if symptoms occur) and daily until the hypocalcaemia improves. 2 The guidelines also state that an elevated (or upper normal range) serum PTH at the time of the occurrence of hypocalcaemia is a predictor of transient hypoparathyroidsm which is likely to recover. However, no guidance is given as to when to measure PTH levels.
We decided to utilise these guidelines as the framework against which to audit our current clinical practice. Regarding calcium supplementation, we were specifically interested in our concordance with the guidelines provided by the Society for Endocrinology (UK) in 2016 [4].
We aimed to utilise the information gained to construct new agreed local guidelines for the monitoring and management of hypocalcaemia after thyroid surgery.
Methods

A retrospective audit was conducted over a 12 month period from 1st April 2015 to 31st March 2016 looking at all patients undergoing total or completion thyroidectomy performed by two consultant head and neck surgeons within our ENT department.
Patients undergoing diagnostic hemithyroidectomy only were excluded from the audit since post-operative hypocalcaemia is virtually non-existent in these patients. All patients satisfying the above inclusion criteria were included in the audit.
We used hospital IT systems and reviewed all patient notes to cover the following areas; timing and results of blood tests (corrected calcium and/or PTH), documentation of symptoms of hypocalcaemia, initiation and duration of calcium supplementation and follow up/timing of further blood tests.
The data was then analysed in accordance with the BTA 2014 guidelines for the management of thyroid cancer and also the Society for Endocrinology 2016 guidelines [2,4]. We also performed further statistical analyses to assess the utility of specific blood tests in predicting temporary or permanent hypocalcaemia.

45 patients were identified with an age range of 22 to 86 years and male: female ratio of 20:25. The local population number was 90'472, giving an incidence of 49.7 per 100'000 population. 34 patients underwent total thyroidectomy and 11 completion thyroidectomy. All eligible patients had their blood test results and notes available; hence all were included in our audit.
15 patients (33.3%) required calcium supplementation for hypocalcaemia. Of these 15 patients, 4 still required supplementation at 6 months; defined as permanent hypocalcaemia (8.9% of all patients). Corrected calcium levels had normalised for the remaining 11 patients within 6 months; defined as temporary hypocalcaemia (24% of all patients). Only 6 patients (13.3%) had documented symptoms of hypocalcaemia.
At four hours post-operatively, 37.7% (17/45) had corrected calcium measured and 26.7% (12/45) had PTH measured. Whereas, at one day post-operatively (usually the following morning), 100% (45/45) had corrected calcium measured and 73.3% (33/45) had PTH measured. 2 patients required intravenous calcium replacement.
This was appropriately given in accordance with Society for Endocrinology guidelines due to symptomatic hypocalcaemia with corrected calcium < 1.9 mmol/litre. 8 patients were started on 1-alfacalcidol which was given in keeping with guidelines in 4 cases. In the remaining 4 cases, administration was deemed inappropriate as in these cases sandocal 1000 or similar calcium salt had not been given initially.
Statistical analysis including sensitivity, specificity, positive predictive value (PPV) and negative predictive value (NPV) of specific blood tests in predicting temporary or permanent hypocalcaemia yielded the following results:

The audit suffered from several limitations. Firstly, several patients did not have the relevant blood tests performed at four hours post-operatively. Specifically, only 17/45 (37.7%) had calcium measured and only 12/45 (26.7%) had PTH measured. This was largely due to differing practices between the two ENT surgeons, with only one of the consultants requesting blood tests at this time interval. Another contributing factor was that junior colleagues covering out of hours sometimes did not request blood tests at 4 hours or sent the incorrect colour or number of blood bottles. The small numbers meant that meaningful statistical analyses were limited for the 4-hour blood test results. Secondly, only 15/45 (33.3%) patients required calcium supplementation. Again, this small number limits the ability to generate meaningful statistical analyses for the hypocalcaemia group. This is slightly higher than hypocalcaemia rates in similar previous studies, namely Lombardi, et al-16/53 (30%), Cayo, et al.- 31/143 (22%) and Sywak et al 18/100 (18%) [1,3,5]. The reason for our slightly higher post-operative hypocalcaemia rate is unclear although it is noted that the previous studies only included patients following total rather than completion thyroidectomy. Nonetheless, useful information can be derived from our audit for the prediction of post-operative eucalcaemia since most patients 30/45 (67%) were eucalcaemic. The statistical data analyses suggest that a low 4 hr PTH level has high sensitivity (100%), NPV (100%), specificity (85%) and PPV (83%) in predicting temporary hypocalcaemia and may be more useful than a 24 hr PTH (69% sensitivity). This finding was also noted by Lombardi et al in 2004 and by the Australian Endocrine Surgeons group in 2007 [5,6]. This may be due to the fact that PTH is an unstable molecule with a short half-life of ~1-4 minutes, which therefore allows detection of a fall in levels in the early post-operative period [3,5]. A low 4 hr PTH level also had high sensitivity (100%) and NPV (100%) in predicting permanent hypocalcaemia A next day corrected calcium result appeared to have high sensitivity (100%) in predicting temporary hypocalcaemia. In terms of combining test results, a combined low 4 hr PTH and low corrected calcium had high specificity (100%) and PPV (100%) in predicting temporary hypocalcaemia. Hence, there is some value in also checking corrected calcium levels at the same time as 4 hour PTH levels. A combined low 4 hr PTH and low corrected calcium had high sensitivity (100%) and NPV (100%) in predicting permanent hypocalcaemia.
The results show that in accordance with BTA 2014 guidelines, all patients (45/45) had corrected calcium measured at one day post-operatively. 73.3% (33/45) also had PTH measured at the same time. Society for Endocrinology guidelines with regard to calcium supplementation were also largely being followed apart from in the 4 cases where sandocal 1000 or similar calcium salt had not been given prior to starting 1-alfacalcidol.
Upon reviewing other clinical guidelines, we noted that the British Association of Endocrine and Thyroid Surgeons have also produced post thyroidectomy hypocalcaemia guidelines in 2012 [7]. These guidelines suggest checking corrected calcium levels within 12 hours post-operatively and then every 12 hrs until the hypocalcaemia improves. There is no comment on monitoring PTH levels.
The American Thyroid Association (ATA) has produced a statement on outpatient thyroidectomy in 2013 [8]. This suggests that since temporary hypocalcaemia may occur in up to 25% of patients, usually manifesting 48 - 72 hours after surgery, routine oral calcium supplementation is not unreasonable.
It is widely recognised throughout the world literature that postoperative PTH levels are a useful early indicator of  hypocalcaemia after total thyroidectomy [3,5,9,10]. Although there is no consensus on optimal timing of PTH measurement, it appears from most of these studies that measurements taken at 2-4 hours post-operatively are the most informative. The ATA 2013 statement also postulates that routine calcium monitoring may be helpful in addition to PTH monitoring as a fail-safe mechanism should the PTH level be spuriously normal [8]. It would therefore seem sensible to suggest that early monitoring of patients undergoing total or completion thyroidectomy should include both PTH and calcium measurement, with the first blood test being taken at 4 hours after surgery. Intriguingly, a recent larger study of 149 patients has shown that a very low early PTH result, particularly where there has been a significant drop from preoperative baseline, poses a significant hypocalcaemia risk [11]. Similarly, we noted in our audit that all patients with PTH < 0.3 pmol/litre at 4 hours after surgery developed hypocalcaemia. We decided to take these findings into account when constructing local postoperative hypocalcaemia management guidelines (Figure 1).