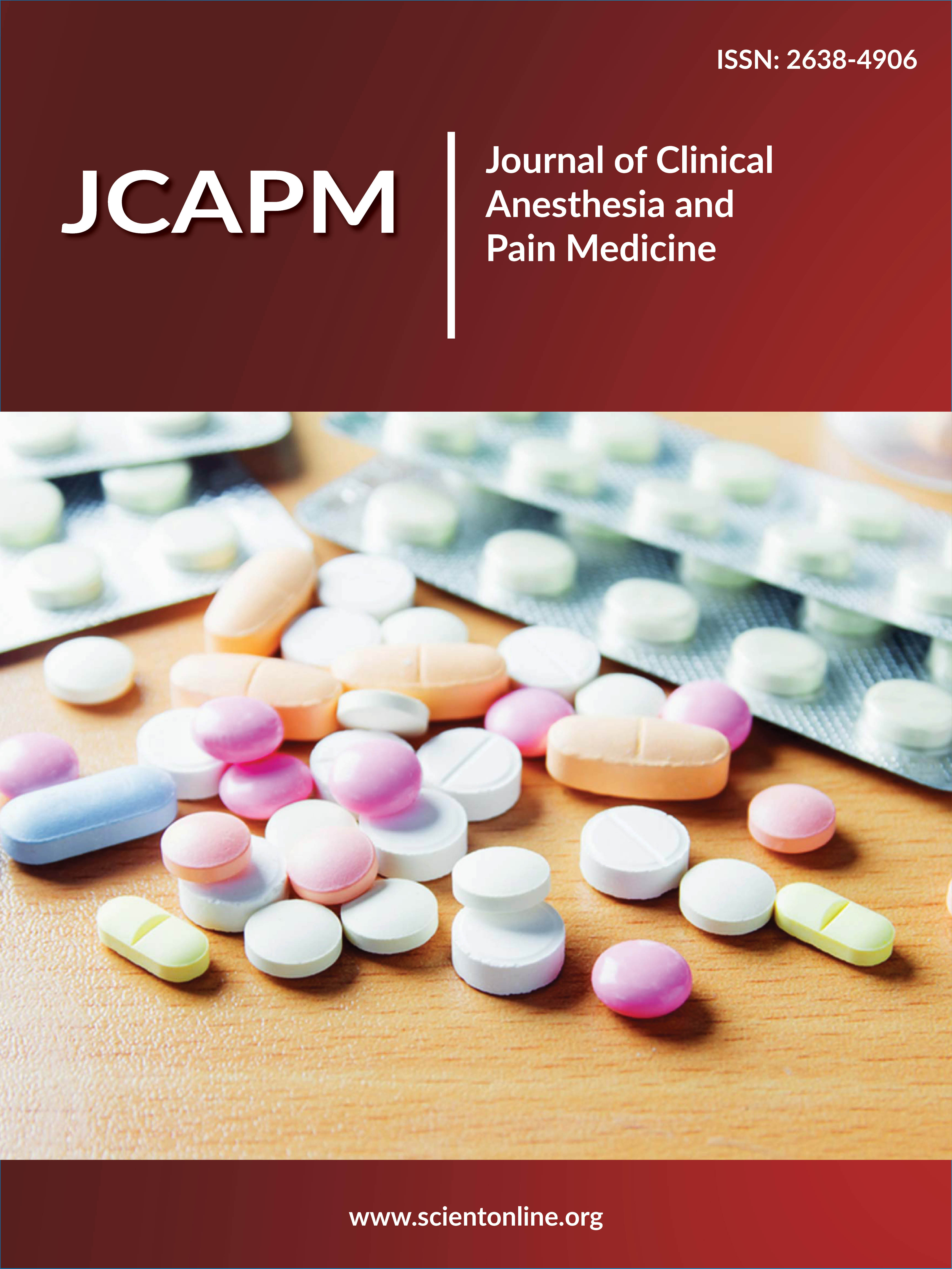 Citation: Olutayo Ariyo (2021). A Rare Formation of Lateral Cutaneous Nerve of the Forearm and its Clinical Significance in Anesthesiology

Copyright: 2021 Olutayo Ariyo. This is an open-access article distributed under the terms of the Creative Commons Attribution License, which permits unrestricted use, distribution, and reproduction in any medium, provided the original author and source are credited.

Introduction
The musculocutaneous nerve (MCMN) is the principal nerve of the lateral cord of the brachial plexus, other nerves derived from the lateral cord include the lateral head of the median nerve and the lateral pectoral nerve.
Several morphological branching pattern of the MCN had been classified and reported by several authors. Le Minor had reported 5 different patterns of the MCN, ranging from its complete absence, the nerve running entirely fused with the lateral root or with the MN itself, before emerging as twigs supplying their respective flexor arm muscles [1].
Other variants of the MCN include its complete fusion with the median nerve (MN), exiting from the MN before giving motor supplies to the 3 flexor arm muscles- viz, the coracobrachialis, biceps brachii and brachialis respectively [1]).
The 3 principal peripheral infraclavicular peripheral nerves of the brachial plexus in the flexor arm compartment are the MCN, MN and the ulnar nerve (UN).
Variations between these peripheral nerves are related more to communications between members, with most of these between the MCN and the MN. Veniaratos and Anagnostopoulu reported 22 communications in 16 out of 79 cadavers [2]. Prasada Rao PV & Chaudhary SC (2000) dissected twenty four upper limbs and reported 8 instances of communication from MCN to the median nerve with bilateral communication observed in 2 cadavers [3].

Communications between ulnar and MN are restricted mostly to communications in the distal forearm region and are classified either as Martin-Gruber anastomosis [4].
The standard text book description of the anatomy of the MCN is that of the nerve penetrating the coracobrachialis muscle, the nerve lying between the biceps brachii and brachialis until it emerges as a sensory nerve on the brachialis at the point of formation of the biceps tendon 5cm proximal to the elbow crease (de Jong, 1965) [5]. Variants of the lateral cutaneous nerve of the forearm from extensive literature search is very rare, but Vollala VR (2008), reported a variant of the LCNF with a loop of the nerve traversed by perforating vein [6]. Compression syndrome of LCNF present usually with pain or numbness along the radial aspect of the distal forearm also sometimes spelled “antebrachial”) passes behind the cephalic, and divides, opposite the elbow joint into a volar and a dorsal branch. The volar branch (ramus volaris; anterior branch) descends along the radial border of the forearm to the wrist, and supplies the skin over the lateral half of its volar surface which communicates with the superficial branch of the radial nerve and with the palmar cutaneous branch of the median nerve. The dorsal branch (ramus dorsalis; posterior branch) descends, along the dorsal surface of the radial side of the forearm to the wrist. It supplies the skin of the lower twothirds of the dorso-lateral surface of the forearm, communicating with the superficial branch of the radial nerve and the dorsal antebrachial cutaneous branch [7].

Case Report
During routine dissection in our facility, we encountered an unusual communication between the MN and MCN was encountered in the distal one third of the right arm of a 70 yearold male cadaver. The MCN penetrated the coracobrachialis muscle normally, The MN ran entirely lateral to the medially placed brachial artery in the entire arm. Emerging from beneath the coracobrachialis muscle, the MCN gave motor branches to the biceps and brachialis muscle and about mid-arm coursed as a fine filament between the biceps brachii and the brachialis muscle ). A medial filament from the mid arm coursed mediolaterally to join the continuation of the MCN distal to the latter having given off its motor branches. These 2 filaments joined at about mid-half of the biceps brachii tendon following which the union emerged at the lateral border of the biceps brachii tendon as LCNF. No extra muscle bellies were encountered in the flexor arm compartment.
The lateral cutaneous nerve of the fore arm in the left limb was normal and was exclusively a continuation of the MCN after the latter had given muscular supplies to the 3 brachial flexor muscles, There was no observed communicating branch from the MN to the LCNF.

Discussion
Thorough familiarity with anatomical relationship, knowledge of contributions leading to variant formation are important towards lessening complications as well as to obtaining complete block with minimum of discomfort, complications and side effects. Frequent irregularities of the MCN include the nerve being adherent for some distance to the MN and then pass outward, beneath the Biceps brachii, instead of through the Coracobrachialis. Some of the fibers of the MN may run for some distance in the MCN and then leave it to join their proper trunk; less frequently the reverse is the case, and the MN sends a branch to join the MCN Occasionally the MCN may give a filament to the Pronator teres. In the absence of the superficial branch of the radial nerve, the MCN supplies the dorsal surface of the thumb [7].

The usual LCNF is typically formed from the MCN distal to the motor branches of the latter had been given off proximally. Cases of reciprocal communications between the MN and the MCN, most usually from the MCN to the ulnar nerves [1-3], but a communication between the MN and --LCNF specifically is very rare and from an extensive literature search had found no such report..
A number of techniques are employed in giving a block to the MCN, including that of axillary block as described by Hirschel which involves directing the needle in the fascial sheath towards the first rib [8] and modified techniques employing larger amounts (40-50 ml of anesthetic designed to force the solution up to the level of the junction of the MCN with the lateral cord of the brachial plexus (Moir, 1962) [9]. Modern trends in anesthesia involve the use of ultrasound guided regional anesthesia (UGRA) which had been widely reported with improved success rate (when compared to traditional approaches) as a result of reduction in performance times, providing more insight to needle-nerve interactions and in revealing distinct limitations of nerve stimulator techniques.

Appreciation of the exact anatomy of a nerve enables this to be blocked precisely with small amounts of local anesthetic. Knowledge of precise variant anatomic formation of any given life, are important to anesthesiologist in achieving improved success rates and in reduction in performance times. We hope our reported variant receives some consideration when a prolonged duration or failure of analgesia in the skin areas supplied by LCNF are delayed in infraclavicular MCN block proximally.
We are reporting this rare variant formation of the LCNF to contribute to what may constitute a prolonged duration to achieve total analgesia in the area of skin supplied by the nerve in the forearm in the traditional approach of the MCN block between the 2 heads of the biceps brachii muscle, However, an advantage of the UGRA as an investigative tool in the distal third of arm may be important in picking up the exact location of the 2 heads forming the nerve as infiltration at that location or distally will most probably lead to a shorter time with minimal anesthetic dosage.