Home/
Journal of Pregnancy and Newborncare

Copyright: 2021 Motlhoki Lillian Dikeledi, et al. This is an open-access article distributed under the terms of the Creative Commons Attribution License, which permits unrestricted use, distribution, and reproduction in any medium, provided the original author and source are credited.

Background: Central line-associated blood stream infections (CLABSIs) are largely related to Healthcare Associated Infections (HAIs) among Neonatal Intensive Care units (NICUs) [1-5]. Preventing CLABSIs in NICUs requires a collaborated multidisciplinary approach in ensuring adherence CLABSI prevention bundles by all multidisciplinary teams in NICU [15]. CLABSIs contribute to 12% to 25% of mortality rate among NICU patients [1-3]. It also increases length of stay and costs of care of patients in NICU [1-10]. There is a need for commitment and collaboration among multidisciplinary teams in NICU in preventing CLABSI [15].
Methods: A descriptive cross sectional study was conducted through utilization of structured self administrative questionnaire. Prospective quality improvement interventions that reduce CLABSI were implemented. That included implementation and maintenance of CLABSI prevention bundles, provision of education and training of Healthcare workers (HCWs) in NICU about CLABSI bundles, and the best strategies in managing it, development of forms, toolkits and policies related to CLABSI. Participants in this research composed of NICU multidisciplinary team, namely: Permanent medical and nursing staff assigned in NICU and others i.e assigned Infection control practitioner, link representation for CLABSI, medical supply representation assigned in NICU, Quality improvement practitioner and NICU Head of the Department. Regular meeting were held with multidisciplinary team and collaboration with all stake holders in NICU. The main driver in achieving positive results for prevention of CLABSI was through effective utilization of CLABSI prevention bundle. That was enhanced further by ensuring teamwork, commitment among all teams in NICU, interdisciplinary coaching, communication, learning and information sharing, monitoring, review and provision of feedback among NICU HCWs, Infection control department teams, and others. Rate of CLABSI and central line utilization ratios in NICU was observed for a period of one year and two months (From March 2017 until May 2018), which includes three months of pre intervention, six months of implementation and five months post intervention.

Conclusions: Research findings in this study reviled that ,the implementation of a collaborated multidisciplinary approach on Central Line Associated Blood Stream Infection (CLABSI) prevention bundles among multidisciplinary teams in NICU may yield tremendous decrease in CLABSI rate. However ensuring effective and efficient patients ‘safety, sustainability in the reduction of CLABSI in NICU requires more commitment, communication and collaboration among HCWs in NICU [15].

Introduction
CLABSI contributes tremendously to increased morbidity and mortality among NICU babies [1-8]. Some studies reveal CLABSI to be associated with increased length of stay, further leading to increased healthcare costs among babies admitted in NICU.

It is regarded as a type of HAIs and it is commonly found in an Intensive care unit (ICU) setting and predominantly affecting severe premature babies due to their immature immune system and frequently requiring invasive devices including central lines [3-10]. Centre of Disease control and prevention define CLABSI as “a primary blood stream infection in a patient which had central line inserted, whereby within a period of 48 hours patient develops a blood stream infection which is not related to an infection at another site”. CVCs among NICU babies associated with CLABSI. Most common CLABSIs in NICU are as a result of insertion of UVCs, UACs and PICC lines. Inserting central lines to NICU patients is common and largely to premature and low birth weight babies [1-10]. That is done to address the need for inotropes, blood and blood products, Total parenteral nutrition (TPN), and antibiotics, blood sampling and blood pressure monitoring, and so on. Obtaining a reliable, safe and secure vascular access forms an integral aspect of caring for NICU patients [1-10]. Therefore central lines are mostly used to facilitate venous access to mostly severe premature babies and severely sick babies in NICU setting. The best common method of reducing CLABSI in most developed countries is through CLABSI bundles implementation. CLABSI bundles are defined as “the invasive procedure which involves insertion and maintaining central lines while incorporating best evidenced based practices.
Those elements are as follows: proper performance of hand hygiene, ensuring maximal barrier precaution at insertion, correct catheter size selection, chlorhexidine skin antisepsis, daily assessment and review of the necessity of the line, utilization of closed needles intravascular systems, sterile line access, ensuring optimal cleanliness and intactness of the line dressing [11-14]. The most commonly inserted central lines in NICUs are: Umbilical venous catheter (UVC), Umbilical Arterial catheter (UAC), peripherally inserted central catheter (PICC) and Broviac lines [1-10,14,15]. These lines facilitate easy intravenous access. CLABSI is commonly aggravated by the following factors: overcrowding, lack of resources, prematurity and low birth weight, lack of hand hygiene compliance, lack of teamwork and collaboration among multi disciplinary teams in NICU [10-15].

Ethical considerations
Permission to embark upon the study was achieved thru approval of the Institutional Review Board of the organisation for approval for research to be conducted in the institution. Informed written consent was obtained from participants.

Study population and sampling strategy
Study population sourced from medical, nursing and other staffs that are fulltime employed in NICU for period of at least two years and above were included in the study. The names of the participants were picked electronically through the utilization of organisation data scheduling.

Methods
Study setting
Research was conducted in a tertiary hospital, level III NICU where majority of babies admitted are critically ill which are severely premature, low birth-weight requiring complex treatment. Such patients may commonly require UVCs, UACs, PICC lines for receiving medications, blood and blood products, total parenteral nutrition, blood pressure monitoring and so on. There are multidisciplinary teams assigned in NICU which
are Doctors, Nurses, and others namely: Infection control coordinator (monitoring and reporting CLABSI to the teams), Quality improvement co-ordinator, designated medical suppliers’ representative, NICU data-base manager, Head of the department. CLABSI bundles are implemented in the Unit. On daily basis multidisciplinary team assess and evaluate the need for UVC, UAC, PICC line insertion, removal or for keeping it. The team update each other about the progress of the patients admitted in NICU. Multidisciplinary team members attended Infection control course related to CLABSI management and there is also a policy available for that.

Data collection
Structured questionnaire was given to participants (multidisciplinary teams) working in NICU namely: Doctors, Nurses and to complete it during their convenient time. The total number of participants is 1 since all staff working in NICU was included in the study. The purpose of the study was explained by the researcher to the respondents. They were reassured about the privacy and anonymity. An informed consent was obtained; respondents were issued with envelopes and were requested to place the answered questionnaires in sealed envelopes.

Data analysis
Data was analyzed, and descriptive statistics were used to assess and describe the ability of the medical, nursing staff and others to effectively understand the importance in the implementation a collaborated multidisciplinary approach on Central Line Associated Blood Stream Infection (CLABSI) prevention bundles in NICU patients. Data was entered in on Excel sheets and then analysed by the researcher using SPSS (Statistical Package for Social Sciences) version 22.0 2018. All data was examined through utilization of Descriptive analysis. Quantitative data analysis technique was applied, and descriptive statistics were used to explain data. P value of less than 0.05 was considered significant. Further analysis was applied to determine the statistical difference between variables. Medical, nursing and other staff working in NICU was given the questionnaires. The total population of all the staff categories was 172 (N=172). The total population was included in the study. The total number of returned questionnaires was 164 (n=164). Therefore, the response rate was 88%. The questionnaire
response rate was calculated by dividing the total number of returned questionnaires over the number of total number of participants that were sampled.

Discussions
A collaborated multidisciplinary team in NICU tends to enhance reduction CLABSI tremendously [1-10]. Some studies reveled lack of skill as another factor that may contribute to CLABSI in NICU, and unavailability of appropriate guidelines of managing CLABSI [1-5,10,15]. For reduction of CLABSI in NICU, it is vital for multidisciplinary teams to ensure adherence to central line insertion and maintenance bundles. Several studies showed how adhering to CLABSI prevention bundles may yield tremendous reduction of CLABSI among NICU patients. The timing and decision of keeping and removing the central line should be well communicated among the multidisciplinary teams taking care of babies in NICU. Several studies reveled the relationship of multidisciplinary collaboration and communication among teams in NICU may yield reduction of HAIs among NICU patients. However risks verses benefit of keeping or removing the central line should be effectively evaluated and communicated among all multidisciplinary teams in NICU. Some studies reveled increased incidences of CLABSIs among patients with surgically placed tunneled central venous catheters (T-CVCs) during the period of seven to nine weeks compared to the first three weeks inserted. However other studies showed increased risk of CLABSI among patients with PICC lines after thirty five days as compared to the first two to three weeks inserted [1,3,7]. Therefore the length and the reasons for keeping central venous catheter should be adequately revised so as to reduce the risk of CLABSI among NICU babies [1-10]. Several studies reported CLABSI incidence ranges between 3.2-21.8 CLABSIs per central line days [10].

Results
Table 1 represent the socio-demographic characteristics of the participants, whereby majority are nurses n=(90%) and non-Saudi staff n=(94%). Table 2 demonstrate the view of the participants regarding CLABSI, whereby majority believe that multidisciplinary collaboration may reduce CLABSI rate in NICU. Table 3 and figure 1 demonstrate the representativeness of the sample, which is 88% response rate.
Table 4 shows Central line utilization ratio and CLABSI events and rates in NICU with significant reduction of CLABSI rates from 7.0 per 1000 central line days to 2.1 per 1000 central from pre intervention to during intervention phase (p<0.001) and from 2.1 to 1.7 per 1000 central line days post intervention. Central line utilization (CLUR) ratio, which is central line days to bed days, also decreased between pre and post intervention phase from 0.57 to 0.51 (p<0.001). Table 5 demonstrate the list of common responsible microorganisms for CLABSI in NICU during the study period, which demonstrates significant reduction during intervention and post intervention phase. There was an observed increase in compliance of utilization of bundle, communication, interdisciplinary collaboration within intervention phase. The study reviled that majority of the participants believe that prevention of CLABSI requires a collaborated multidisciplinary approach.

Acknowledgements
I would like to send my sincere appreciation to my mother and Sir Qaraqei Mustafa for the support given, as well as King Fahad Medical City’s ethics committee.
Competing interests
Author declares no personal or financial relationships which could have inappropriately influenced the study
Author's contribution
LDM is the principal investigator for the study and assumed primary responsibility for writing this article. 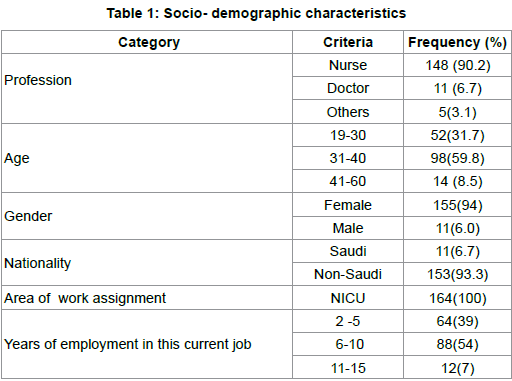 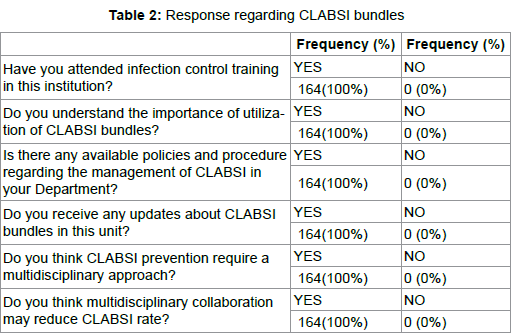 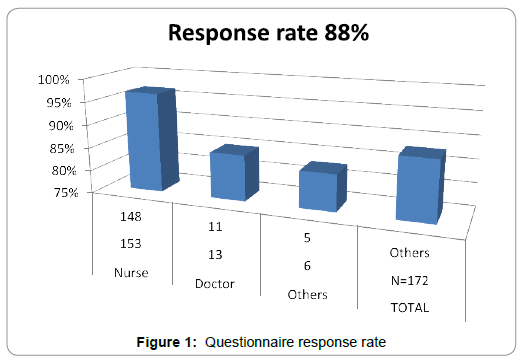 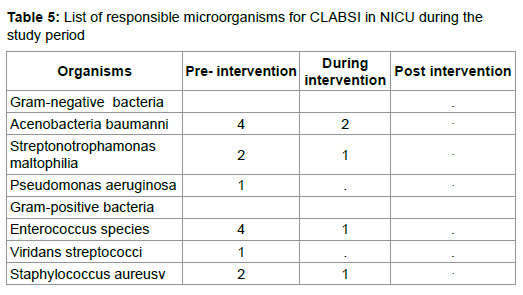