Home/
Journal of Pregnancy and Newborncare

Traditional beliefs and Practices in Newborn Care among Mothers in Shaanxi Province, China

Copyright: Copyright: © 2021 Tawali Shah, et al. This is an open-access article distributed under the terms of the Creative Commons Attribution License, which permits unrestricted use, distribution, and reproduction in any medium, provided the original author and source are credited

China has the largest population country in the world with more than 70% of the people living in urban areas more than 34% of children under the age of 5 years are responded to demonstrate moderate or severe growth stunting, [1] Recent childbirth and early infant care strategy and practice in China is not allied with WHO recommendations for several main interventions [2]. A numeral of cultural practices and beliefs held by families, predominantly grandparents, prevent evidence-based practices. Chinese customary birth rituals need a woman to be restricted at home for one full month after giving birth, and to scrutinize a wide set of preventive prescriptions and proscriptions [3]. At current still, inadequate care is causing maternal and child health problems, especially in developing countries. Of the entire deaths which happen in the first five years of life, 36% are newborn deaths. In fact, of the approximately four million global neonatal deaths that occur annually, 98% occur in developing countries. As most births and deaths occur outside any established health care facility, a reduction in neonatal mortality may depend significantly on interventions involving promotion or adaptation of traditional care behaviors practiced at home [4]. Cultural principles, attitudes, beliefs, and behaviors influence lifestyle and health. For that reason, culture is considered a dynamic factor that plays a significant role in health and diseases. Traditional practices follow-on from principles of a particular culture affect children mainly. A family unit, which mirrors values, civilization, customs, and beliefs, i.e. culture of a society to which it belongs, plays an essential role in physical, psychological, and social development and health in children. Customary child care practices influence children’s health [5]. The common newborn’s mortality rate in developing countries is more than eight times that prevailing in developed countries [6]. Irresistible confirmation demonstrates that prenatal care, skilled attendance at birth, and sufficient postpartum care could radically decrease maternal (and infant) mortality rates. Childbirth takes place in a cultural context that is shaped by the perceptions and practices of that culture, Therefore, childbirth and the postpartum period are constructed within the behavioral, social, and experiential content of cultural values [7,8] several Asian countries have beliefs about postpartum recovery and make similar traditional postpartum customs. The traditions contain rest at home for a defined period, and limited activity, keeping warm, cleanliness, and nutritional practices in such societies [9,10] a lot of traditional beliefs and practices throughout the postpartum period are adhered to by the woman and her family unit to guarantee the health and wellbeing of herself and the newborn [11] numerous Asian countries have beliefs about postpartum revival and produce comparable traditional postpartum customs. The traditions include rest at the house for a defined period, and limited activity, keeping warm, cleanliness, and dietetic practices in such societies [12,13] even if they might be different from culture to culture, pregnancy, birth, and newborn care correlated beliefs and practices become visible in all communities and could play an imperative role in baby health Mothers’ attitudes towards health, health behaviors, education level and practices through illnesses of their children also play an imperative role in child health. Therefore, nurses should be able to recognize and investigate values likely to affect health behaviors [6] a lot of women in Asian societies persist to practice a large range of traditional beliefs and practice through pregnancy, newborn birth, and postpartum time [14]. In our society, women get information from family unit members, elders, and traditional birth attendants. Therefore, these groups, hopeful mothers and mothers of newborns are supposed to be targeted with educational messages. Newborn care, parallel to additional human behaviors, is influenced by cultural beliefs therefore investigation of cultural beliefs and practices of newborn care is necessary [15]. In Chinese culture, the customs of the traditional postpartum practices can be dated from the Song Dynasty (960- 1279 A.D) while the conceptual derivation may have begun more than the 2000 years ago [16]. The postpartum one month is called Zuo Yuezi in China. The literal translation means “doing the month” by tradition, a woman remains at home during this period [17] throughout this time, her behavior about diet, activity, and hygiene is determined by tradition, and the theory behind traditional Chinese medicine (TCM) underlies some of these beliefs and practices. Health is seen as harmony between yin qi and yang qi; and illness an imbalance between the two forces. Pregnancy is a yang state, but during childbirth, the woman loses heat and becomes yin. The behavior around diet, activity, and hygiene that comprise “doing the month” is to restore the equilibrium [18,19].

There is no large-scale study that reveals all traditional child care practices performed on women with newborn babies younger than 3-month-old in Shaanxi Province. Therefore, we carried out the present study to address this knowledge gap, gain an understanding of traditional practices, and investigate the actors influencing such practices. To this aim, we searched for the answers to the following questions in this study: What traditional child care practices were performed by mothers with newborn babies younger than three-month-old? Was there a relationship between traditional child care practices, mothers’ and baby interaction, type of food intake, the umbilical cord cleaning method, baby feeding method, family type, education, origin and residence father, mother, and grandparents both caring method and baby body development records,? What happens to newborn care in the one month postpartum is called Zuo Yuezi. The literal translation means “doing the month” who are no longer in their cultural environment and who have been uprooted from their familiar society? Does newborn care still take place within its cultural context? This, largely, has not been documented. We still lack in-depth knowledge about traditional beliefs and practices related to newborn care of “doing the month” women, and how Hmong women and their families deal with newborn care childbirth in their new social environment

Methods
Sample
The institutional review board of Xi’an Jiaotong Medical University approved the study protocol. The families included in the study were selected based on the records in Xian Jiaotong University First Affiliated Hospital outpatient department. The families were informed about the nature of the study and provide informed consent. The study detected health problems of families and conducted appropriate interventions. The study sample was including women with newborn babies less than three-month-old and who accepted to participate in the study. Data was collected from volunteering mothers from the families followed in the Out- Patient Department. All mothers who were living in the study area, who have newborn babies younger than three-month-old, who had no communication problems were included in the study.

Instruments
The data was collected with a questionnaire developed by the researchers and translated from Chinese into English. The mothers, who answered “yes”, were asked to explain these traditional newborn care practices. By the author who interviewed mothers were offered training for interviews. Data were collected at face to face mother’s interviews which lasted for 30-45 minutes. The questionnaire used to collect data
was composed of demographic characteristics and traditional child care practices. There were questions about demographic characteristics, traditional child care practices, and childrearing. The mothers were questioned whether traditional practices were made with their newborns, perinatal information, pregnancy complications, delivery method and newborn birth conditions, breastfeeding methods, baby water intake, mother feeding, umbilical cord care methods, baby oil massage, baby body covering and dressing methods, raising baby methods and newborns growth factors measurements. There were set of questions focusing on traditional child and mother care practices and postpartum about feeding the time of first breastfeeding, the way of baby bathing, food dietary precautions, eating more food, eating “hot” food (protein-rich), resting at home, bathing, eating fruit and vegetables, restricted dental hygiene, dressing, umbilical cord care, who caring newborns in the family unit,(parents or grandparents) supplementary feeding of breastfed newborn and giving hot water and sugar or honeysuckle to the newborn.

Acknowledgments
We would like to thank all the participants & staff of Xi’an Jiaotong University first affiliated hospital for their support.

Conflicts Of Interest
The authors declare no conflict of interest. 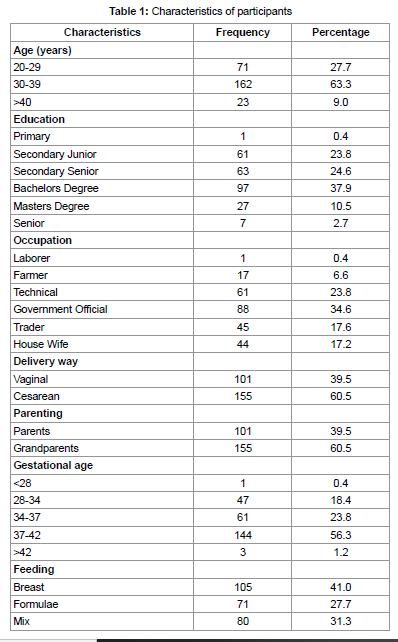 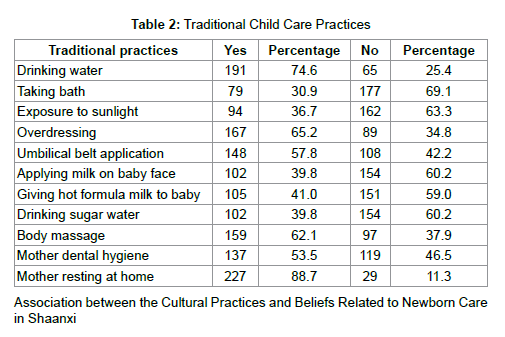 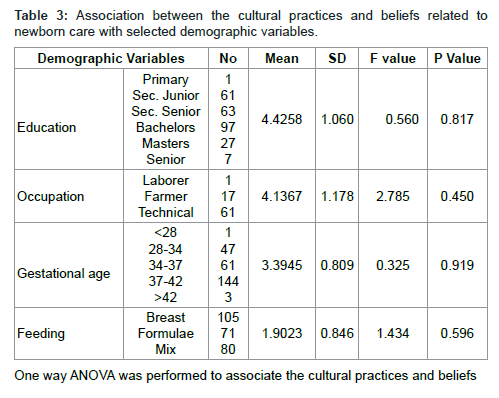 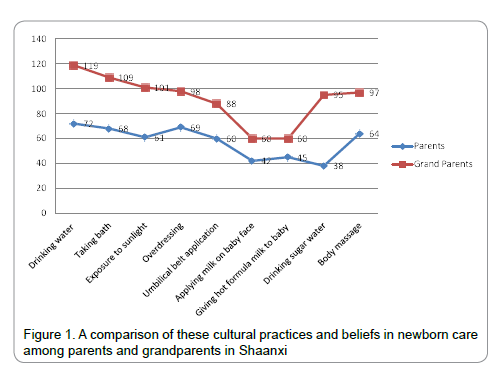