Left Diaphragmatic Eventration in an Adult: A Rare Case Report

Copyright: © 2021 Yash Patel, et al. This is an open-access article distributed under the terms of the Creative Commons Attribution License, which permits unrestricted use, distribution, and reproduction in any medium, provided the original author and source are credited

Diaphragmatic eventration is a congenital developmental defect of the muscular portion of the diaphragm. It has been attributed to abnormal myoblast migration to the septum transversum and pleuroperitoneal membrane. Diaphragmatic eventration is rare (incidence<0.05%), being more common in male. We present a rare case of 29-year-old male with congenital diaphragmatic eventration presenting an adult. The present case, though quite infrequent. The clinical features included intermittent dyspnea and abdominal pain for 3 months. The left hemithorax presented invasion of fundus of stomach and part of left lobe of liver. The treatment approach was laparoscopic diaphragmatic plication. The outcome was satisfactory. Eventration of diaphragm represents a clinical and diagnostic challenge; clinicians, radiologists and surgeons must be alert with a high degree of suspicion in order to correlate symptoms and imaging findings and understand the etiopathogenesis. In addition, they should plan an adequate and individualized surgical repair making use, as far as possible, of the minimally invasive procedures that are currently used.
Keywords: Eventration of diaphragm, Hemithorax, Diaphragmatic plication, Surgery

There are four types of congenital diaphragmatic defects: posterolateral Bochdalek diaphragmatic hernia, Morgagni- Larrey parasternal diaphragmatic hernia, peritonealpericardial diaphragmatic hernia, and diaphragmatic eventration [1]. Diaphragm eventration refers to partial or total replacement of diaphragm muscle and fibroelastic tissue causing displacement of hemi diaphragm. The hemidiaphragm may have a normal appearance or variable degree of tissue degeneration, thus forming a translucent membrane without muscle fibres [2]. It consists of the elevation of one, or less likely, both hemidiaphragms causing protrusion of the intra-abdominal viscera to the affected hemithorax. The difference between diaphragmatic hernia and eventration is important; in the latter, there is no true defect. The incidence of diaphragmatic  eventration is <0.05% [3].
Diaphragmatic eventration can be congenital or acquired. Congenital eventration is a developmental abnormality secondary to hypoplasia of the homolateral lung or diaphragmatic muscular aplasia leading to cardiorespiratory symptoms. In adults it is mostly because of diaphragmatic palsy through injury to the phrenic nerve that causes dyspnea. This incidence of this anomaly is 1 in 10000 live births. They commonly are presented with respiratory manifestations. Acquired diaphragmatic eventration occurs in older children and adults. There are also some patients without any explained cause of ED which is considered as idiopathic eventration. Idiopathic form frequently affects adults, is the result of a subclinical viral infection and presents commonly with unilateral involvement [25]. Diagnosis is delayed due to no symptoms or very mild ones and is generally done by imaging modalities [25].
The treatment must restore an active and effective contraction and improve the respiratory activity. This is achieved with diaphragmatic plication and can be performed vis thoracotomy or using a minimally invasive laparoscopic or using a minimally invasive laparoscopic or thoracoscopic route, with or without the interposition of a prosthetic material [4-6].

Case presentation
We describe the case of a 29-year-old male presented with chief complain of intermittent dyspnea and occasional epigastric discomfort after meals for 3 months.Patient had no previous history of trauma. His BMI was 20 with a blood pressure 132/88 mmHg, heart rate 98 bpm, and oxygen saturation 98% on room air. Physical examination showed bowel sound involving left hemithorax. Imaging with chest X-ray, computed tomography scan showed the fundus of stomach and partial left lobe of liver inside the left hemithorax; Uniform and continuous diaphragmatic elevation throughout the hemithorax. Left lung was found to be collapsed.
Patient underwent plication of the diaphragm using the laparoscopy abdominal approach. Intra-operatively, the left diaphragm was attenuated, membranous and appeared like a cave. Laparoscopy revealed visceral displacement with elevation of the diaphragmatic dome and there was no diaphragmatic rupture, defined as eventration. Plication was done with multiple continuous strata fix sutures.
Incentive spirometry and deep breathing exercises were started. There were no post operative complications. Postoperative chest radiograph showed the expansion of the hemidiaphragm. The patient stayed in the hospital for 5 days with an adequate resolution of the respiratory symptomatology and the operative wound.

Conclusion
Eventration of diaphragm can have different manifestations. So, the relevant differential diagnosis is very important. Nontraumatic diaphragmatic eventration is rarely diagnosed in adults. In those who have severe signs and symptoms and do not show any response to conservative treatment then the aim of treatment is expansion of intrathoracic space which is done by plication of the diaphragm. Diaphragmatic plication decreases intrathoracic pressure, compression force on the heart and lung, as well as allowing for increased lung function and capacity.

Declarations
• Funding: None
• Conflict of interest: None
• Ethical approval: Not required 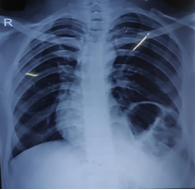 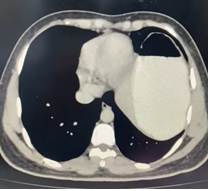 Figure 2: Axial section of both hemithoraces. Fundus of stomach and part of left lobe of liver occupying the left hemithorax. 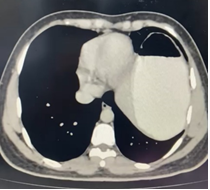 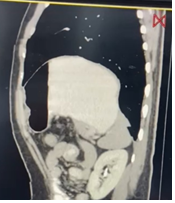 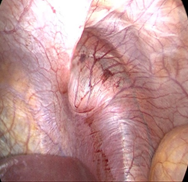 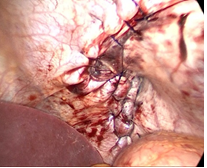 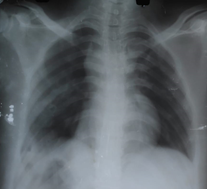