Copyright: © 2022 Raffaele Porfidia, et al. This is an open-access article distributed under the terms of the Creative Commons Attribution License, which permits unrestricted use, distribution, and reproduction in any medium, provided the original author and source are credited.

Summary
Background: Endometriosis is a common, benign, disease that affects women in their reproductive age and it is defined as the presence of ectopic endometrial tissue outside the uterine cavity. Endometriosis can involve any intraperitoneal organ such as the ovaries, peritoneal cavity of the pelvis and rectovaginal septum. It affects the bowel in 3-37% of all cases and histopathological diagnosis is usually straightforward.
Case Report: 43-year-old woman with abdominal pain, localized in the left iliac fossa, associated with hyperpyrexia and closed alvus with stool and gas for 48 hours. Clinical history of ovarian endometriosis. Performed CT abdomen showing abscess collection in the left iliac fossa with a clinical picture similar to complicated sigmoid diverticulitis. She performed diagnostic laparoscopy after 24 hours which revealed a picture of endometriosis of the transverse, ptotic colon, with perforation and pericolonic abscess. Segmental transversus resection and colo-colic anastomosis were performed. Discharged on the fifth day without complications. Histological confirmed endometriosis.
Conclusions: The presence of endometriosis on the middle third of the transverse colon is certainly rare. We explained this location because the transverse colon was notably ptotic and displaced in the left iliac fossa in a patient with a history of left ovarian endometriosis. Histological signs of intestinal perforation were highlighted.
Keywords: Endometriosis, Transverse colon, Emergency surgery

Background
Endometriosis is a common, benign, disease that affects women in their reproductive age, and it is defined as the presence of ectopic endometrial tissue outside the uterine cavity. Endometriosis represents one of the most common causes of pelvic pain [1,2]. It is estimated to affect 4-17% of menstruating women with an average age at diagnosis ranging from 25 to 30 years [3]. Therefore, its most distinctive presenting clinical features are menstrual irregularities, chronic pelvic pain, dysmenorrhea, dyspareunia and infertility. A consistent part of affected women are asymptomatic. Endometriosis can involve any intraperitoneal organ such as the ovaries, peritoneal cavity of the pelvis and rectovaginal septum. It affects the bowel in 3-37% of all cases and histopathological diagnosis is usually straightforward [4]. The most common location of intestinal endometriosis is the rectosigmoid area (50-90%), followed by rectovaginal septum (13%), small bowel (7%), appendix (3-18%) and caecum (4%) [5,6]. In the small bowel, the terminal ileum has the propensity to host the lesion, because it is in the
vicinity of the fallopian tubes and ovary [6].

Case Report
A 43-year-old woman arrives in the emergency room reporting abdominal pain, localized in the left iliac fossa, associated with hyperpyrexia and closed alvo to stool and gas for 48 hours. BMI 25.95. Smoker of 20 cigarettes / day. She does not take drugs. She reports having treated a pelvic abscess with drug therapy four months earlier. A report by the treating gynecologist reported: left ovarian endometriosis and pelvic abscess from probable pelvic inflammatory disease. She exhibited CT abdomen with and without contrast medium and MRI Abdomen and Pelvis four months before which concluded for an endometriotic cyst of the left ovary of about 3 cm. Oral contraceptives was prescribed.
In ER she performed abdomen x-ray showing coprostasis. Blood chemistry tests showed: neutrophilic leukocytosis (19170 x mm3) (84.3%), platelet disease (490000 x mm3) and elevated CRP (134 mg /l). Abdomen CT with and without contrast medium is required for suspected complicated sigmoid diverticulitis in consideration of the marked pain on superficial and deep palpation in the left iliac fossa. CT scan of the abdomen showed: on the left side a voluminous abscess collection with chamber (64x50x87 mm) and lobulated margins, with central necrosis and inhomogeneous peripheral impregnation and inhomogeneity of the adipose cell (photo 1). As the clinical picture remained unaltered, it was decided to carry out diagnostic laparoscopy after 24 hours. The trocars and operators were positioned as for a laparoscopic left hemicolectomy. An abscessalized neoformation of about 10 cm was highlighted, which seemed to involve the greater omentum and was tenaciously adhered to the abdominal wall in the left iliac fossa. Detachment of the same, by blunt way, from the abdominal wall and leakage of pus which is partly sent for culture examination. Release of the aforementioned neoformation from the descending colon and from the sigma. The abscessed neoformation was tenaciously attached to the middle third of the transverse colon. It was complex to assess the integrity of the transverse colon wall, therefore it was decided to make a small supraumbilical incision (photo 2). The neoformation was purplish in color and was in continuity with the colic wall, therefore it was decided to perform a segmental colic resection of the transversus, of about 5 cm, by means of a mechanical suturing machine and restoration of intestinal continuity by means of a mechanical isoperistaltic colo-colic anastomosis. No abdominal drainage was placed. The piece was sent for histological examination with suspicion of intestinal endometriosis (photo 3). Alvo channeled to stool and gas after 48 hours. Normal post-operative course. The patient was discharged in good clinical condition on the sixth postoperative day. There were no complications over the next 30 days.
Culture examination of the purulent material revealed contamination by Staphylococcus Epidermidis sensitive to most of the common antibiotics. Histological examination confirmed the suspicion of endometriosis with infiltration of the intestinal wall from the serosa to the submucosa associated with abscess phenomena. The patient was referred for gynecological consultation.

Discussion
The presence of endometriosis on the middle third of the transverse colon is certainly rare. We explained this location because the transverse colon was notably ptotic and displaced in the left iliac fossa. Histological signs of intestinal perforation were highlighted and the large omentum helped to block the small perforation by creating a localized abscess and avoiding stercoraceous peritonitis. It is not possible to establish with certainty how much the clinical history of left ovarian endometriosis and pelvic abscess could affect the onset, after four months, of the aforementioned clinical picture. Intestinal endometriosis may present with a variety of symptoms exacerbated by menses; this association may
not always be present as seen in our patient. Hemorrhage, intussusceptions, perforation or small bowel obstruction may also occur [7]. Perforation of the bowel wall is a rare outcome of endometriosis. A literature search revealed perforations in 7 cases of jejunum, 3 of ileum, 9 of large bowel and 3 of appendix endometriosis [5,8]. Enteric endometriosis is usually subserosal with less frequent involvement of the  muscularis propria and submucosa. The mucosa is usually intact and uninvolved [9]. The mucosa is only affected in approximately 10% [5,6]. The pathophysiology of bowel perforation secondary to intestinal endometriosis is not clear. However, the presence of foci of intestinal endometriosis may cause a weakness in the affected region of the intestinal wall, facilitating its drilling secondary to peristalsis or traction phenomena of the intestinal wall [10].
In our case report, infiltration also affects the submucosa and the micro-abscesses of the wall are a sign of perforation. Laganà et al. [11] in their review their highlight that treatment of intestinal deep infiltrating endometriosis (DIE) is difficult and challenging. Medical management of DIE with colorectal extension (with nonsteroidal anti-inflammatory drugs, oral contraceptives, gestagens, antigestagens or GnRH agonists) is based on suppression of the symptoms, is not curative, and is often associated with significant side effects [12]. Nevertheless it is not clear if the medical management approach prevents disease progression. In addition, discontinuation of this therapy commonly results in recurrence [13]. Therefore, it is widely agreed that surgical management is the primary treatment for more severe forms of endometriosis, such as symptomatic DIE with colorectal extension [14,15]. Several surgical procedures for endometriosis with bowel involvement have been described using a laparoscopic, a laparotomic, a transvaginal or a combined approach. Nevertheless, more than 70% of women with DIE still underwent segmental bowel resection [16]. Nodulectomy is used for a conservative approach and can be performed using several techniques: traditional or reversal rectal shaving (defined as superficial peeling of bowel serosal and subserosal endometriosis with diathermy loop or laser), mucosal skinning, full-thickness anterior rectal wall excision (defined as selective excision of the bowel endometriotic lesion without opening of the bowel wall), and full-thickness disc excision (defined as selective e excision of the bowel endometriotic lesion, followed by closure of the bowel wall). Radical surgery consists in segmental bowel resection of the affect tract, followed by primary colorectal anastomosis with or without protective ileostomy (depending on the distance between DIE localization and anal sphincter) [16]. In general, only patients with intestinal DIE lesions measuring up to 25-30 mm may be candidates for conservative surgery, either shaving rectal/mucosal skinning or disk resection [17]. The depth of infiltration of endometriotic lesions into the bowel wall is another important variable to consider in the surgical treatment of choice.

Acknowledgements
We thank the colleagues of the Emergency Department, of Radiology (in particular Dr. Giuseppina Napolitano and Dr. Antonio Romeo), of Anesthesia and Intensive Care, the nursing staff of the operating room and the operating room instrumentalists (Assunta D’Amico and Anna Galiero) of the Nursing home Villa dei Fiori- Acerra- Naples-Italy. 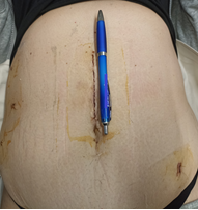 Photo 2: Mini supraumbilical incision (extension equal to half of a common pen) 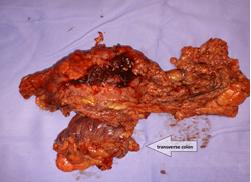 Photo 3: Operative piece (segmental resection of the transverse colon indicated by the arrow) with abscess blocked by the greater omentum